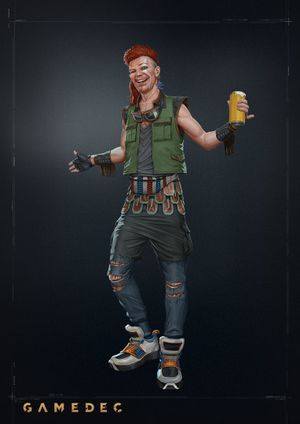 Herman Tick is one of the characters in Gamedec.

He served in the private army called "Thunder" (PMC - Private Military Companies), in Belize (South America) for a contractor about whom he does not want to talk. He saw and did terrible things there, which resulted in getting his PTSD (Post Traumatic Stress Disorder). Faced with recurrent suicidal thoughts, he followed the Yet's advice and joined techno-confessions. Cheap, counterfeit G-Pod first gave him a religious high, and then burned his brain. The effect of high and burn was the disappearance of suicidal thoughts. Tick lost contact with reality. In other words, it messed him up. Tick, like most soldiers, does not remove his scars.