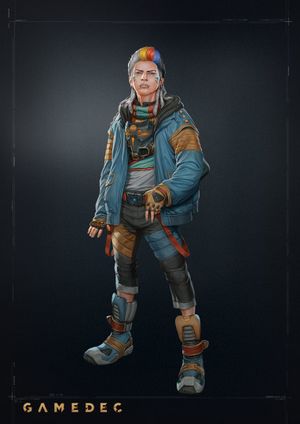 Kid (possibly a placeholder name) is one of the characters in Gamedec.

One of many kids growing up in the worst parts of Low City. When he was five years old, his parents threw him out on the street and forbade him to return until he earned the right amount of money. He tried begging and stealing, but he did not satisfy drug-addicted parents. He has an older brother, Paul, who escapes from reality in games. Together with his brother, they came up with the idea of selling game items to other players. Kid sells what Paul gets in games. Kid spends earned money on brother's nutrition, food, and stuff for his parents. He feels responsible for his family, and his childish part believes that if he works hard enough, maybe one day, his family will be healthy and happy. His more mature part knows that he can't change his parents, but he can change himself. For now, he is looking for ways to set up his mini-gang by organizing a network of kids from Low City for gold farming.