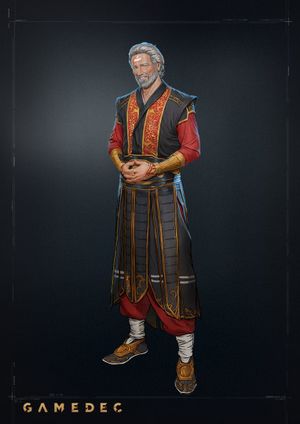 Lord (possibly a placeholder name) is one of the characters in Gamedec.

One of the oldest senior players in Knight's Code, he remembers the beginnings. For years he was a member of the Shin House. He served as Lord Commander of the provinces of Sahan and Ridarra, and from this period he was nicknamed "Lord". He was the first to find the Tree of Truth in Knight's Code. Members of the Shin House decided to meet in reality, where Gallo was not accepted as a poor Low City resident. When, despite many attempts, it turned out that he could not enter the inner chamber of the Tree, his position weakened. His old friends turned away from him, and his girlfriend could not stand the relationships with an older man. Soon after, he left the Shin House and began the path to discovering the secrets of the Tree. He took on a lot of activities in the game, becoming more and more permeating the virtual universe and stopped treating reality as something worth attention. He came to the conclusion that the ruffled life of the playboy he led as a hero of the Shin clan is unacceptable to the Tree, and to learn its secrets, he must get rid of his impulses and focus on perfection of the spirit. It became a code of the  Arete/Hon, which he founded, seeking to find the Tree again.