From Gamedec Wiki
(Redirected from Old Vet)
Jump to: navigation, search
This article is a stub. You can help Gamedec Wiki by expanding it. 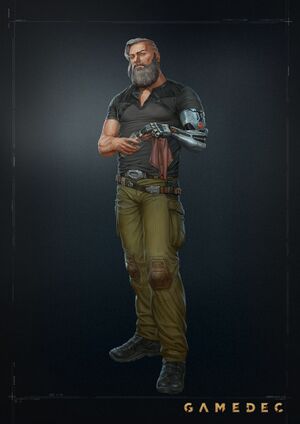 Old Yet is one of the characters in Gamedec.

Old Yet was a contract soldier in the Thunder PMC (Private Military Company). He fought in the jungle of Belize along with Herman Tick, and robot Rick. During the fighting, he lost his hand and then consciousness. According to Tick, Rick got him out of the trap, and Tick shielded their backs. Yet did not regenerate his arm, but, according to the soldier's tradition, equipped himself with the original military prosthesis of Soldier's Things. Seeing what was happening to Tick, he resigned his service in Thunder and, for the money earned during the mission, founded the Yeti's Coming bar in the hometown of Lower Ochotou. In the beginning, the bar was a network cafe, where Frost Beasts, founded by Yet, was playing. The bar was hit by the mafia and demanded money "for protection." They also offered Yet cheap neurostimulators and "cheap gamepill." Thanks to the mafia merchandise, the Frost Beast members started climbing in the rankings and making good money. Competitive clans flung gamedec's investigation, which proved that Yet and his clan was using illegal drugs. Old Yet and the whole clan got a permaban. Yet's career as a player was over. Since then, Yet hates gamedecs and falls into nihilism. Now he runs the bar without enthusiasm; his only living passion is gravitational ball and the Barcelona Breakers team. Stoic calmly, he sells the "cheap gamepill" to the players.