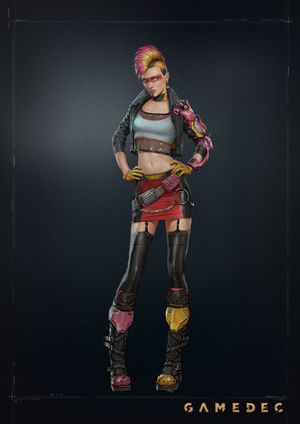 Ramona is one of the characters in Gamedec.

Ramona was a cheerleader dancing for Black Knights, one of the second league teams playing gravity ball. After one of the players tried to rape her, and the trainer covered up the case and threatened her that if she publicized the case, she would be seriously harmed, she left. Her dysfunctional family did not provide her support. She was employed in one of the pubs as a waitress, but she was molested again. She stopped trusting people. She began to roam the lower parts of the city. As she was getting ready for a suicide jump into the undercity, she met the Shooting Stars clan, and the Lord called her dove and said that instead of falling, she should fly. She joined the clan and then learned its secret - the game Knight's Code. It changed her life. She became a fundraiser for the Hon/Arete family. Her task, in reality, was to seduce wealthy, susceptible candidates for the House. With Ken Zhou, an athlete playing gravitational ball, it was supposed to be just like with the others. Ramona's heart changed. In the meantime, abuse of the "cheap gamepill" has harmed her health, and she began to have uncontrollable right-hand movements. The Lord bought her an exoskeleton to counteract the progressive nerve dysfunction of her hand, but the battery often fails, and then Ramona's hand shakes or moves involuntarily (as in Parkinson's patients). She offended the Lord and was suspended from family duties for two months. Ken discovered the game's boil, betrayed House to House Shin, and promised Ramona that they would leave together. Ramona hoped Ken would succeed.